Meeting Yeditepe University Faculty of Law professor and Istanbul Tax Center Chairman Prof.. Dr. It started with the opening speech of Hakan Üzeltürk. At the beginning of the opening speech, Prof. Üzeltürk, Prof. Dr. Adnan Tezel commemorated Adnan Tezel with respect and gratitude at this meeting, which he stated was a continuation of the series of Adnan Tezel meetings. He also thanked Yeditepe University Faculty of Law Dean and Law Club for their valuable contribution to the organization of the meeting. In the continuation of his speech, Üzeltürk talked about the importance of the meeting topic and introduced the names of the speakers as speakers.

The meeting started with the speech of Adnan Nas. Nas, who previously served on the board of directors at Galatasaray Sports Club, talked about the structural problems in Turkish football and the measures and solutions to be taken to resolve these problems. The next speaker Hüsnü Güreli conveyed the financial situation of Turkish football to the audience after he remembered Adnan Tezel with respect and gave some information about him at the beginning of his speech. In this presentation, which was followed with great interest by the audience, the reasons, dimensions and solution suggestions of the financial problems experienced by Turkish Clubs were explained. After the presentation of Güreli, Tuğrul Akşar made his speech at the meeting. Continuing to work in this field as a football economist, Akşar transferred the economic dimensions of Turkish football to the audience in comparison with European countries. Aksar offered especially the need to analyze both the latest situation in the leading European leagues in Turkey regarding the broadcasting rights constitute a major part of the economic size of football. 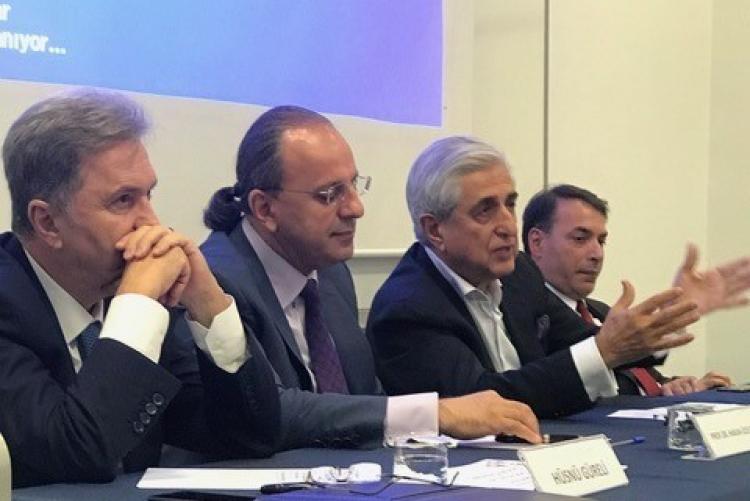